For the first time in my 8 years as a full time Coach, I will be collaborating with my sifu in chess, Coach Seto, and Creative Chess Enterprise, Coach Balen. It is a unique experience to team up with my sifu together with my comrade in chess organisation. With our proven track record in grooming dozens of young children till represent the country, we are putting together a powerful chess training excellence programme camp on 6th & 7th June 2011 for children who inspire to represent Malaysia one day.

In Malaysia, many chess companies / academies / private enterprises have conducted chess camps actively in the past 5 years especially during the school holiday. From the research done, many chess camps just belong to "having some fun" camp category. So, I didn't want to associate with such a camp and would I say will not collaborate with parties in doing such camps. Therefore, I conduct CTEP camp for my own students only, no outsider is allowed.

Why am I collaborating with Others for the first time? It all began from a casual chit chat I had with Coach Balen in one of coffeeshops in town. He was telling me " this and that" on the camps he helped out others. Basically, those are the same reasons (in not many words) why I didn't collaborate with others. So I popped a question, why not you run one yourself? The rest is history. Here, we present to you a chess camp that we called Chess Training Excellence Programme camp.

How is this CTEP camp different from those "having some fun" camp?

1. The camp material will be customised manually based on the students chess understanding / level.

2. The camp material is extracted from a customisable self-develop methodology which is proven to produce more than 3 dozens of children (not just one individual, or 2, may be 3, 5, or 10 individuals) from the rudimental level like just knowing how pieces move until an expert level of representing the country.

3. The coaches share the same kind of believe on what are the best chess ingredients and what it takes for children of rudimental chess knowledge to grow. 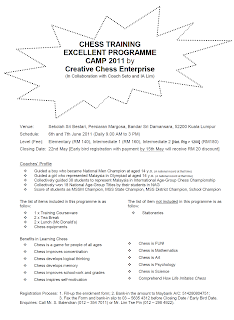 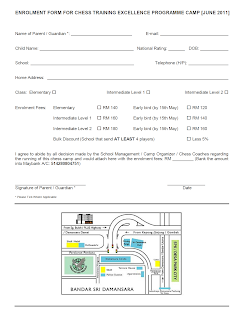 This is an old piece of information but I would like to post it just to have a closure to my earlier article entitled "NAG 2011 Title Contenders" that was posted before the start of the Championship. Sorry to say that I'm unable to post this article earlier as I'm out of the country in the last 2 weeks.

I'm surprise that I'm able to make a perfect prediction as all names appeared in my list of NAG 2011 Title Contenders. One of the bloggers wrote something in his blog in response to my earlier article before the Age-Group started. I choose not to comment on his article at that time as this may upset some players preparation toward the championship. As for now, I also choose not to comment but all I can say my evaluation did cover a very wide scope (not only technical in chess). You want to know the scope - "Trade secret!".

For the record, I did not make any prediction for both categories in Under-8. The champions as follow:-
The Under-8 Boys >> Tan Jun Ying from Penang;
The Under-8 Girls >> Goh Jie Yi from Penang.

From the stats, Penang won 5 national titles followed by KL with 4 titles and Selangor with 3 titles. So, Penang is the Overall Champion in the Best of the Best Category. 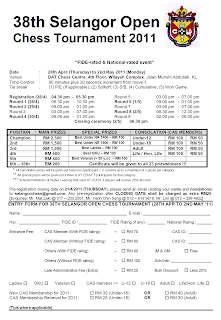 Please click on the image to enlarge the picture.

This FIDE-rated event (also a nationally rated event) will be organised from 28th Apr to 2nd May 2011 at DATCC, 4th floor, Wilayah Complex, KL. The total prize fund for this event is RM 7,500 with the 38th Selangor Open Champion to receive RM 2,500 in cash.

This yr NAG will be held at Universiti Teknologi Petronas, Tronoh, Perak. It is going to be 2 yrs in a row the NAG to be held outside Klang Valley. The number of entries so far stands at 332 pax [revised to 378 pax after submission from late entries taking into account] still a far cry from 450 to 500 pax (if to be held in Klang Valley) but far better numbers representation if we compared with last year edition around 250 pax. The larger number is attributed by a significant increase in children from Klang Valley taking part in this year edition.

The Under-18 Girls Championship title will be a straight fight between Latifah Kaiyisah (NR 1548) from KL and Winnie Hong (NR 1531) from Selangor after Amira Syamina was slotted wrongly in this category.

The Under-14 Girls Championship title will be a straight fight between WCM Nur Nabila (NR 1792) from Selangor and WNM Wendy Tan from KL (NR 1688) from KL.

The Under-12 Girls Championship title will be a straight fight between WFM Nur Najiha (NR 1748) and Puteri Rifqah (NR 1525) from Selangor.

The Under-12 Girls Championship title will be a straight fight between Puteri Munajjah (NR 1611) from Selangor and Teh De Zen (NR 1376) from Penang.

The Under-08 Boys and Under-08 Girls Championship title will be anybody guessing.

All names mentioned here have been quantified and analyzed based on their chess skills from the namelist published by Marcus Yeoh in his blogsite. Any player whose name does not appear here but have a higher rating than the "weakest" contenders in the category is deemed to have some missing basic chess fundamentals to support his/her quest to win the National Age-Group title.

It's worth mentioning that Gilocatur's blogsite has some evaluation on title contenders too.

Finally, I wish all title contenders to have a pleasant outing and able to scalp new heights in skill towards attaining mastery level in future.

SJK(C) Kepong 2 conquered the Sentul Zone with 5 GOLD, 2 SILVER, 1 BRONZE from 6 categories played over 4 days. With this result, SJK(C) Kepong 2 is the most dominant school so far (after 3 zones had completed with 1 zone remaining to contest) in this year zone level chess event.

Also, a big thank you to the Organiser of this zone (Cikgu Azwan and the team) for uploading the full result so fast. The result is uploaded on the same day as the event finished. This is the type of efficiency we are talking. 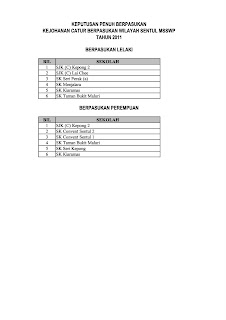 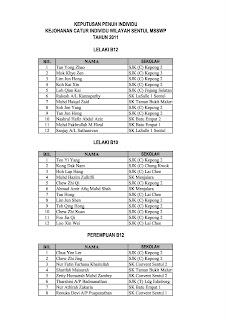 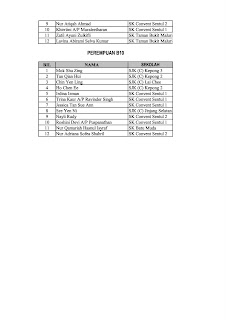 The individual results (courtesy from MSSMKL blogsite) for the U-10 and U-12 category in Girls section as below: 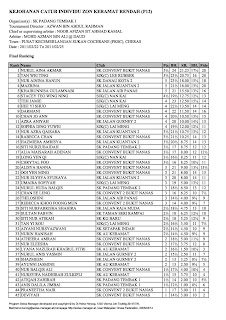 In the U-12 category, SK CBN 1 has 3 contestants qualify into the Final, followed by SJK(C) Nan Kai and SJK(C) Lai Meng with 2 contestants each, while one each from 5 different schools. 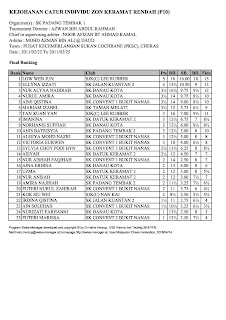 After a tough 5 rounds battle, SK Danau Kota leads the way into the Final with 3 contestants, followed by SJK(C) Lee Rubber and SK CBN1 with 2 contestants each, while one each from 5 different schools.

The individual results (courtesy from MSSMKL blogsite) for the U-10 and U-12 category in Boys section as below: 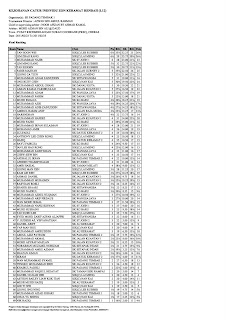 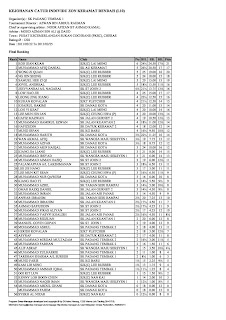 I'm pleased to announce that Coach L trainees (Only 2 persons in this zone) have emerged as Champion in both categories contested.

I did not attend this event as I did not have any school playing in this zone. Here is the result for this zone (Courtesy from MSSMKL blogsite): 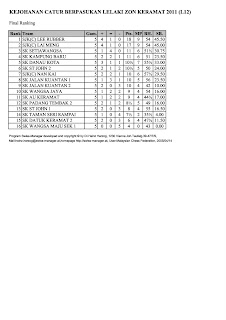 This could be the most populated zone with 16 schools took part. The stars for this zone are heavyweight SJK(C) Lee Rubber under Coach KK and "surprise, surprise" SJK(C) Lai Meng under Coach JT. Both schools Board 1 player are anchored by Coach L trainees. Coincidently, they are the only two students Coach L has in this zone. How they fare in Individual? check out in the next posting. 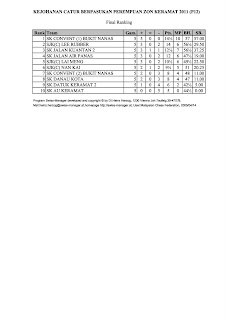 With the departure of NWM Wendy Tan from SJK(C) Lee Rubber, the vacumm is immediately felt by the school and CBN1 under Coach G took full advantage of the situation to pip the former to the title by half a point.

The dates on primary schools chess event for this zone is changed from 22nd March to 1st March unexpectedly. Some schools were not informed on the changes as well as no notice/circular informing schools in this zone with regards to the technical meeting on the change of dates. One of the affected schools is SJK(C) Kepong 2.

It was quick fortunate that Coach L who is coaching the school found out this piece of information just in time before the closing date set by the organising committee lapsed. So, SJK(C) Kepong 2 manages to register their students for the competition at the 11th hour without a chance to attend the already organised meeting for all schools in Sentul. This is the 2nd yr in a row that Kepong 2 did not receive notification on the meeting.

To cut the long story short, the school just received a copy of registration form without any details attached upon making a request to the hosting school. The school was told to go on 1st March. There is no indication whatsoever by the hosting school that 1st March is for team event or individual event. Nevertheless, Kepong 2 sent a team of boys and girls (on Coach L information) to compete without having any details on tournaments regulations like Rd 1 starting time, number of rounds to be contested, duration per player, and etc.

Upon arriving at the hosting school, SK Kiaramas @ Persiaran Dutamas, there were schools sending load of students who suppose to compete in Individual event. After seeing so many students actually came for Individual event, some parents of Kepong 2 are confused and doubt whether Coach L had gave a wrong information by asking another 14 Kepong 2 students who are slated to play in Individual event only not to be there on 1st March. After much confusion among the participating schools, it was made clear by the Organiser that 1st of March event is for Team only. Phew!!!!

The round began with 7 schools competing in the Girls category where the hosting school put up a "B team" to even out the number. A very good move indeed and an acceptable norm! While, the Boys category has 7 schools competing with one of the schools has requested for slating a "B team" since their Individual players already there but was denied by the organiser. Later, the accompanying teacher from that school found out a "B team" was allowed. In this case, the "B team" was not from the hosting school. The school teacher was literally jumping mad after learning it from the pairing. Why the bias? The organiser owes an explanation to that school teacher.

The way the tournament progress was quite anti-climax with the top 2 schools played each other in Round 2 for both sections. In the Boys section, SJK(C) Kepong 2 came out with a 4 nil result. The title was decided. As for the Girls section, both top schools tied 2-2. From then onwards, it was left to see which school actually drop points to other schools in a race to the finish. One of the them had put up 4 nil result in the remaining 3 rounds.

Now comes to the final result of the team event. I'm pleased to annouce that SJK(C) Kepong 2 had won both sections with 18 points from 20 games played.