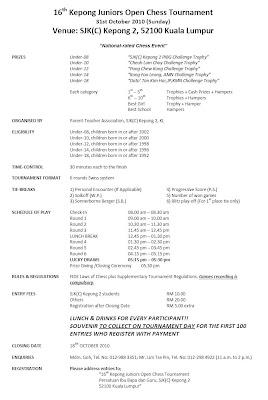 The Rules and Regulations 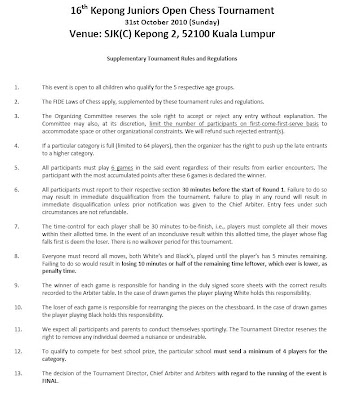 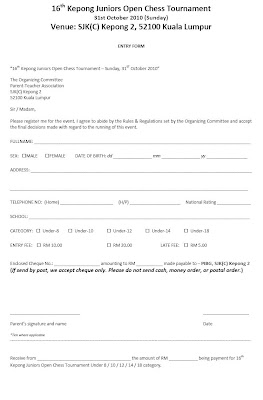 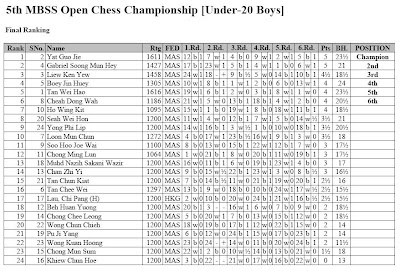 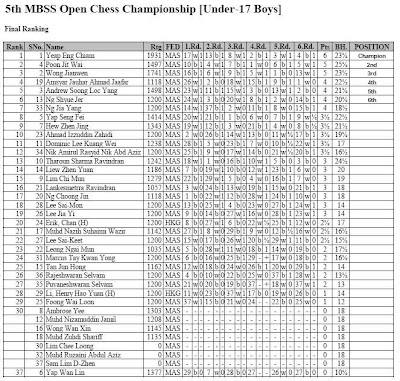 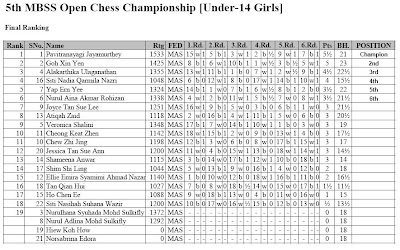 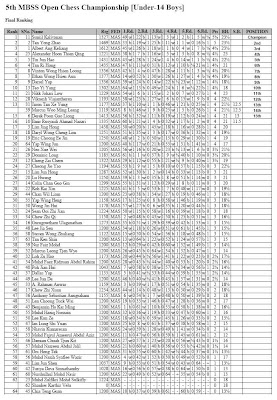 In Under-14 Boys category, under rated Suniil Kalivanan of SMK Subang Utama triumphed over Albert Ang in Round 4 had proven basically my prediction made over the last few days when one of the MBS (Primary) students asked me who will win the Under-14 category.

For you information, Albert as a former MBPS student is well known among his juniors in primary school. Every chess player in the primary school try to emulate his chess glory in primary school. We have witnessed Derek in NAG last year, then Viknesh in MSSMWP this year, and now Jaron Tan in MBSS event.

Lets come back to Suniil, he is trained by my master in chess. Who is my master? U find it out yourself. With the victory against Albert, he has one more critical hurdler to clear i.e. Win against Tan Yong Zhao in Round 5 which he secured easily. In the last round, he was pitted against Tin Jun Hao who is 1 point behind the sole leader and all he needs to do is to offer a draw but alas this event is conducted under "No Draw by mutual agreement in first 30 moves". He waited patiently until 30 moves were reached before drawing the game. While, Tin was happy with the draw after he suffered unexpected lost in Rd 4 to Alexander Hoon and did not want to suffer the same fate like the top two seeded players in the event.

Meanwhile, Tan Yong Zhao scored 4 consecutive wins which include stopping giant-killer Nikk Johari who in earlier rounds had shattered the championship dream of Tan Ri Hong and Derek Poon. However, he failed to stop Suniil marched towards the title. Nevertheless, he won his last round against another giant-killer Emir who had upset one of the pre-tournament favourites, Lim Jing Hong, in round 5. By the way, Albert was awarded 3rd placing based on better tie-break over 7 other players who obtained 4.5 points.

In Under-14 Girls category, Pavitranayagi Jayamurthey of Convent Sentul has emerged as the Champion for her category after scoring 5 wins and a draw. Her only draw was against her nearest rival, Goh Xin Yen, in round 4.

Meanwhile, Goh Xin Yen had a scared of her life by almost losing to Alakarthika in the following round. She was lucky to escape with a draw after a series of bad moves in endgame played her opponent. Again, she had the luck in taking advantage of her inexperience opponent to score a full point in her last round against Yap Ern Yee. With both the results, she secured a 2nd place finishing. While, Alakarthika had to settle for 3rd place after managing only 4 wins and a draw.

5th MBSS Open [U-17]: Both Yeap and Teh secure an easy victory in their respective group

In Under-17 Boys category, Yeap Eng Chiam of MBSS crushes all his 6-round opponents include some resistent over the board from another pre-tournament favourite, Wong Jianwen of Wesley Methodist. While, Wong finishes 3rd after losing on tie-break to another title contender, Poon Jit Wai. Both players suffered 1 defeat only at the hand of the Champion. Poon justified his 2nd place finishing with highest solkoff points in this category by defeating players who had finished at 4th, 5th, 6th, 7th, and 10th in this event. He has +2 solkoff points margin over Yeap.

In Under-17 Girls category, Teh Kai Wen of SMK Kepong Baru as expected crushes all her 6-round opponents to win the title. While, Eunice Yee justified her seeding by finishing 2nd behind Teh. Third place went to Yow Chooi Yee who lost to both top two seeded players in the event.

5th MBSS Open [U-20]: Yat finishes as Champion on tie-break and Olivia cruises to an easy victory

In Under-20 Boys category, Yat Guo Jie triumphed over Tan Wei Hao in top of the board clash in the final round gave him a memorable victory. Both players experienced shocking defeat at the hands of their school mates Boey and Gabriel on Round 3.

At one stage, it looked like Gabriel Soong which was not in my Championship prediction list was going to champ the event after able to win against Boey Jin Huey in Round 4. However, Yat stoled the limelight by stopping Gabriel in Round 5 to throw the Championship wide open and reinstate Tan as the favorite since the latter has the highest tie-break before the final round. Well, Yat just delivered the unexpected result and the rest is history.

While, Gabriel completed the event on 2nd place after his wins against Cheah Dong Wah who himself won against Boey in Round 5. Boey must be cursing himself after having a fine run in the first 3 rounds but throwed away the title hope with 2 consecutive losses before securing a last round victory to finish on 4th place. Liew Ken Yew is the luckiest person in this category which see him propels to 3rd place without fighting any strong player except Tan where he lost in Round 4.

In Under-20 Girls category, Olivia Madhavan of SMK Seri Bintang Selatan emerged as Champion after crushing all her 6-round oppnents easily. While, Lee Pui Yin who was pitted against Olivia in Round 1 must be the happiest person in this category to finish 2nd behind Olivia. She overcame the Rd 1 nightmare of playing top seed by picking up a bye in Rd 2, won her 3rd round against the only other rated player, then got a walkover aganist Ong Yee Wen in Rd 4, followed by 2 consecutive wins. It is just unbelievable how a contestant fortune can be changed so rapidly. Third place went to Loke Mee Sie who secured 2.5 points from 3 games before conceeding a walkover to Olivia without playing in Rd 4. Then, she lost her Rd 5 to Lee before getting a walkover from Ong in the last round.

5th MBSS Open: Who are the favourites in Under-20?

In Under-20 Boys category, Tan Wei Hao (13 y.o.) of MBSS is the pre-tournament favourite at least on paper to win the title. However, he is ahead by 5 rating points over his school mate, Yat Guo Jie. The dark horse in this category is Boey Jin Huey who is under rated with only 1305 rating points. One of the names listed here should be the Champion for this category.

In Under-20 Girls category, Olivia Madhavan of SMK Seri Bintang Selatan is the pre-tournament favourite to win the title. She has a massive 449 rating points advantage over the next opponent. She will win this category easily.

5th MBSS Open: Who are the favourites in Under-17?

In Under-17 Boys category, Yeap Eng Chiam of MBSS is the pre-tournament favourite to win the title. He has a massive 190 rating points advantage over his next opponent, Wong Jianwen of Wesley Methodist. The dark horse in this category is Poon Jit Wai who in recent tournaments had defeated players like Jax Tham and Abdullah Che Hassan. One of the names listed here should be the Champion for this category.

In Under-17 Girls category, Teh Kai Wen of SMK Kepong Baru is the pre-tournament favourite to win the title. She has 182 rating points advantage over her school mate, Eunice Yee. One of the names listed here should be the Champion for this category.

5th MBSS Open: Who are the favourites in Under-14?

In Under-14 Boys category, Albert Ang of MBSS is the pre-tournament favourite to win the title. He has a massive 142 rating points advantage over his next opponent, Tan Yong Zhao (10 y.o.) of SJK(C) Kepong 2. There are 4 other players within 60 points range from Yong Zhao, namely Lim Jing Hong (MBSS), Tan Ri Hong, Tin Jun Hao, and Derek Poon (MBSS). The dark horse in this category is Suniil Kalivanan who is under rated with only 1327 rating points. One of the names listed here should be the Champion for this category.

In Under-14 Girls category, Pavitranayagi Jayamurthey of Convent Sentul is the pre-tournament favourite to win the title. She has 108 rating points advantage over her next opponent, Goh Xin Yen. There are 2 other players within 70 points range from Xin Yen, namely Nurulhana and Alakharthika too have some chances for the title. Other contenders with outside chances are Veronica, Nurul Aina, and Yap Ern Yee. One of the names listed here should be the Champion for this category.