On behalf of the school management, I would like to announce that the school will be organising the Juniors Open (a National-rated event)on 30 OCTOBER 2011 at the school premise.

This year the event will be held at the newly built canteen that has a seating capacity of more than 700 pax. The build-up space is twice larger than the old venue used in the last 16 editions.

The number of rounds in this edition shall be increased to 7 rounds after the school took into consideration on parents feedback on increasing the number of participants in each category so that their children are not force to compete in higher category after certain quota is reached. Also, four categories will be contested namely Under-08, Under-10, Under-12 and Under-16 in this year edition.

The Infosheet: (Click on the image for an enlarged version) 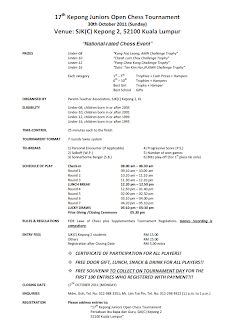 The Additional Rules and Regulations Besides Adopting FIDE Laws of Chess: 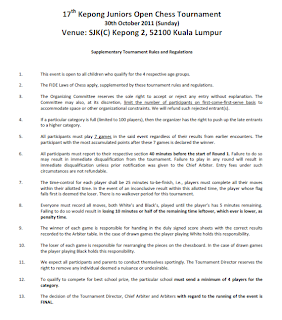 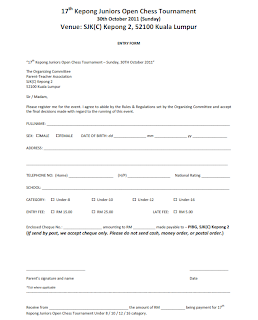 For those who have difficulty in posting the entry form to the school address with a cheque enclosed, please contact me @ 012-298 4922.