The objectives of this event are:-
(I) To encourage chess activities among the participants from various Asian universities and Malaysian students;
(II) To foster closer ties amongst participants and universities in the whole world;
(III) To promote the games of chess so as to become one of the hobbies among undergraduates around the globe;
(IV) To promote Malaysia’s culture and heritage to the international participants.

The 1st edition of GACC backed in the mid 1990's was a collaboration between Chess Association of Selangor, IA Hamid Abd Majid, and University of Malaya. Many years later, I was engaged as Deputy Chief Arbiter for 2 editions and Chief Arbiter for another edition. This event had contributed 2 International Arbiter norms in my application as an International Arbiter. I remembered in one of the editions that I'm involved - It was a very strong tournament  (to be exact the 2003 edition) with many GM or GM-to-be in the like of GM Li Shilong, GM Zhang Zhong, Russian GM Sergey Iskunyh, FM Wang Yue (today a 2700's Super GM), IM Liang Chong (today a GM), IM Wang Rui (today a GM), IM Yu Shaoteng (today a GM and FST), Zhao Jun (today a GM), and etc.

Seeing so many talented and hardworking young chess players in one tournament playing at such a high level has inspired myself to focus in producing more national-level players among school boys and girls via Chess Training Excellence Programme (first coined by Chess Association of Selangor back in the mid 1990's) concept. That's the same period I have started serious coaching with school boys and girls aged between 7 and 12.

I didn't have an opportunity to be part of this event as a player. However, my thought back then was how nice could it be if one day in future one of my students who was absolute beginner (then) can be standing on the podium in this event. Well, my dream has turned into a reality today! with Tan Wei Hao emerges as the Individual Champion for the 20th GACC International Inter-Varsity Chess Championship. During his younger days, he won a National Age-Group Championship 3 years in-a-row (2007 - 2009).


The Organiser, The Summit Subang USJ, continues to hold the Juniors Open Chess Tournament @ Summit Subang USJ Mall for the 5th consecutive years. This one day tournament shall be divided into 4 categories namely Under-8, Under-10, Under-12 and Under-16. This event is a National-rated Event to be held on 10th April 2016 (SUNDAY).

These 4 categories shall have an accumulated cash prize of RM 2,000 to be distributed among 40 prizewinners. The Champion in each Category shall be receiving RM 150 Cash + Medal + Certificate of Achievements. On top of the main prizes, there will be additional 5 prizes for The Most Promising Girls in each category. In addition, the Organiser has added Best School Prizes (Gold Silver, Bronze) for each category. Eligibility for Best School: A minimum of 4 players per school in same category.

The entry fee for each person is RM 30 only. The first 80 players who registered with payment shall be entitled to attend a chess workshop to be held at the same location one day earlier (9th April).

Due to limited seats available, you need to register yourself as quickly as possible by sending an email with the entry form attached to tsepin@gmail.com. Payment instruction will be given in the replied email. All entries will be accepted based on "first comes first serve basis with payment received" followed by "first comes first serve basis on pre-registration".
Click here to download the entry form in PDF format.

Please take note: The date on the entry form had revised to 10/4 accordingly.

The Infosheet for the event as listed below:- 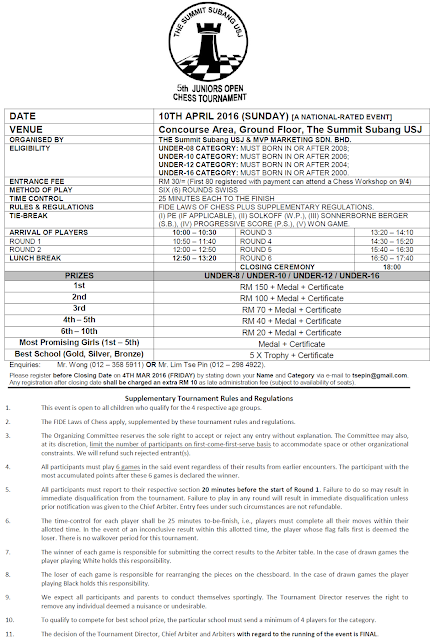 The Entry Form for the event as listed below: 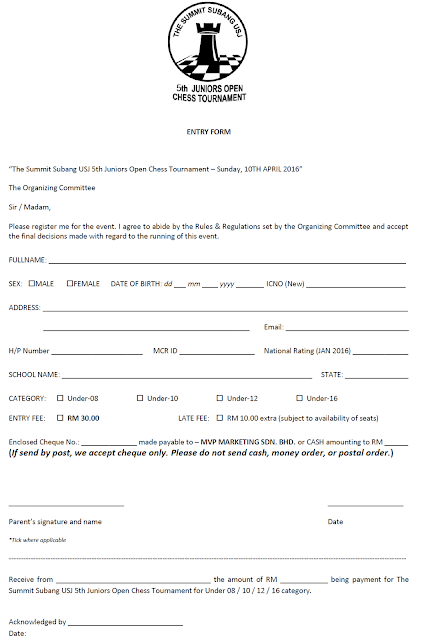 MCF Chess Rating: A typical inquiry that I received after every new quarter release

After every rating release, there is always inquiry on how rating calculation is calculated. The first one arrived 3 hours after I released the Pre-release Article on Friday morning. Subsequently, there are couple of more inquiries until the latest one about 2 hrs ago.

Say. you play all 10 games against players with an average rating of 1300 and won a perfect 10 score. Then, you have scored +5. The K-factor for player from rating 1000 and 1399 is 40. Then you are said to gain (+5 * 40), that is, a massive 200 rating points gained from the event [This is the same algorithm use in FIDE rating calculation]. Now, say you lost all 10 games, then you will lost 200 points too. Usually this kind of extreme scores result seldom happen, however, this quarter we have witnessed at least from one player from each extreme end. 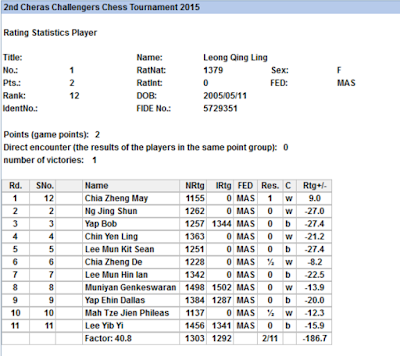 Another example at the other extreme end:- A player who supposed to score no more than 1.5 points based on her rating (1145) but did well by scoring 5 points from 9 games including wins against players who are 200 to 300 rating points higher. 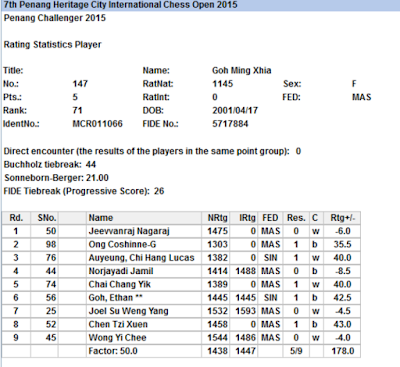 A happy new year to all my visitors!
In January 2016 release, there are 23,917 chess players. This represent an increased of 5.8% from 22,613 chess players in Oct 2015. Of which there is more than 22,300 Malaysians in our chess rating database. A unique MCF Chess Rating ID contains 9-Alphanumeric ID was introduced in the October 2013 edition. Please refer to here for more info.
Please remember your MCF Chess Rating ID to facilitate registration process of National-rated Events and INSIST on the Event Organisers to key-in your MCF Chess Rating ID into IDNo column of the Swiss Manager file to avoid any rating discrepancies.


This list was done up after spending 33,000 minutes (equal to 550 hours) in following steps:- (1) players' name synchronization between tournament file and rating database, (2) ratings check on each player in each tournament file, (3) re-edit result on unplayed games but key in as played games by Event Arbiters, (4) ratings calculation of each player (more than 5000 of them - It broke the previous high of 3,773 in July 2014 release), (5) manual assignment of K-factor to each player based on individual rating bands, (6) players' rating tabulation, (7) compilation of multiple entries of a player into one single unique entry (3,218 of them in this quarter) aka Pre-Release Rating document, (8) insert 3,218 new/revised ratings into Master database (22,613 as of Oct 2015 release), and finally (9) the extraction process into January Rating release document. All these were done in the last 75 days excluding 1-week that I'm away without my notebook i.e. 5 hours daily for first 30days, 9 hrs daily for the next 21days (thanks to sch holiday - no more teaching at schools), break-off for my year-end holiday, and followed by 12 hours daily in the last 18 days. Usually, it takes around 300hrs for the whole rating tabulation with an average of 2,500 entries per quarter.
This is the first time - I'm experiencing back-to-back Quarter release nightmare that never happen in the past 12 years. For your record, there was only 2,364 entries (Jan 2013), 1,591 entries (Jan 2014), 2,136 entries (Jan 2015). This edition "What a SURPRISE! with 5,007 entries".
For the past 12 years, I've been doing this MCF Chess Ratings to give a better gauging system for the development of Malaysian Chess especially among the Juniors below aged 12. It took 6 years of education (2004 - 2009) for the chess community to realize the importance of chess ratings for self-development purpose. Things began to change for the better in 2010 where more tournaments were submitted for national ratings. At first I was happy with the change but it didn't last too long. In 2011, little did I realize this 'baby' that I started from scratch in 2002 (Yup... 2 years before it was adopted by MCF and renamed to MCF Chess Ratings) had turned into a little monster that haunted me 4 times in a year.
It's time for me to pass this baton to people who are much younger (preferably aged between 20 to 35) who can stay up until 3am and sleep for 3hrs before starting a new day. Please send an email to tsepin@gmail.com if you are interested in this job using the manual system.

It's sad that I didn't receive any application who is willing to continue with my work since I posted on it 3 months ago. However, I did receive 2 inquiries (in this quarter) on whether can this rating tabulation process be automated. I sincerely thank both of them. One of them is willing to test out with some "problematic tun files" by developing a "system" with the objective to automate the following process
(1) players' name synchronization between tournament file and rating database, (2) ratings check on each player in each tournament file.
I believe (3) can't be automated. Item (4) to (9) can be automated (real programming work is needed) if there is willing party to build the system for MCF at a small fee or for FREE as a goodwill to Malaysian Chess. Anyway, Item (1) and (2) must be solved, else Garbage In, Garbage Out i.e. "One-tonne" of problems will be created after every quarter release.
Click here to download the complete list of MCF Chess Rating List (JAN 2016).

Click here to download the MCF Chess Rating List of 5,942 Malaysian Female Players. An additional of 383 players (+6.9%) if compared with 3 months ago.
For update on specific player's rating changes in the last 3 months, click here.

This is the pre-release document containing a copy of the rating changes for 3,218 unique players in Q4 2015 can be downloaded from here.

While, a copy of the Top 20 Most Improved chess players in Q4 2015 can be downloaded from here too.

The events that were included in the Jan 2015 release are listed as follows:-