On behalf of SJK(C) Kepong 2, I'm pleased to announce that this year Kepong Juniors Open will be held on 9th November 2014 at the school premise. This is a National-rated Event. 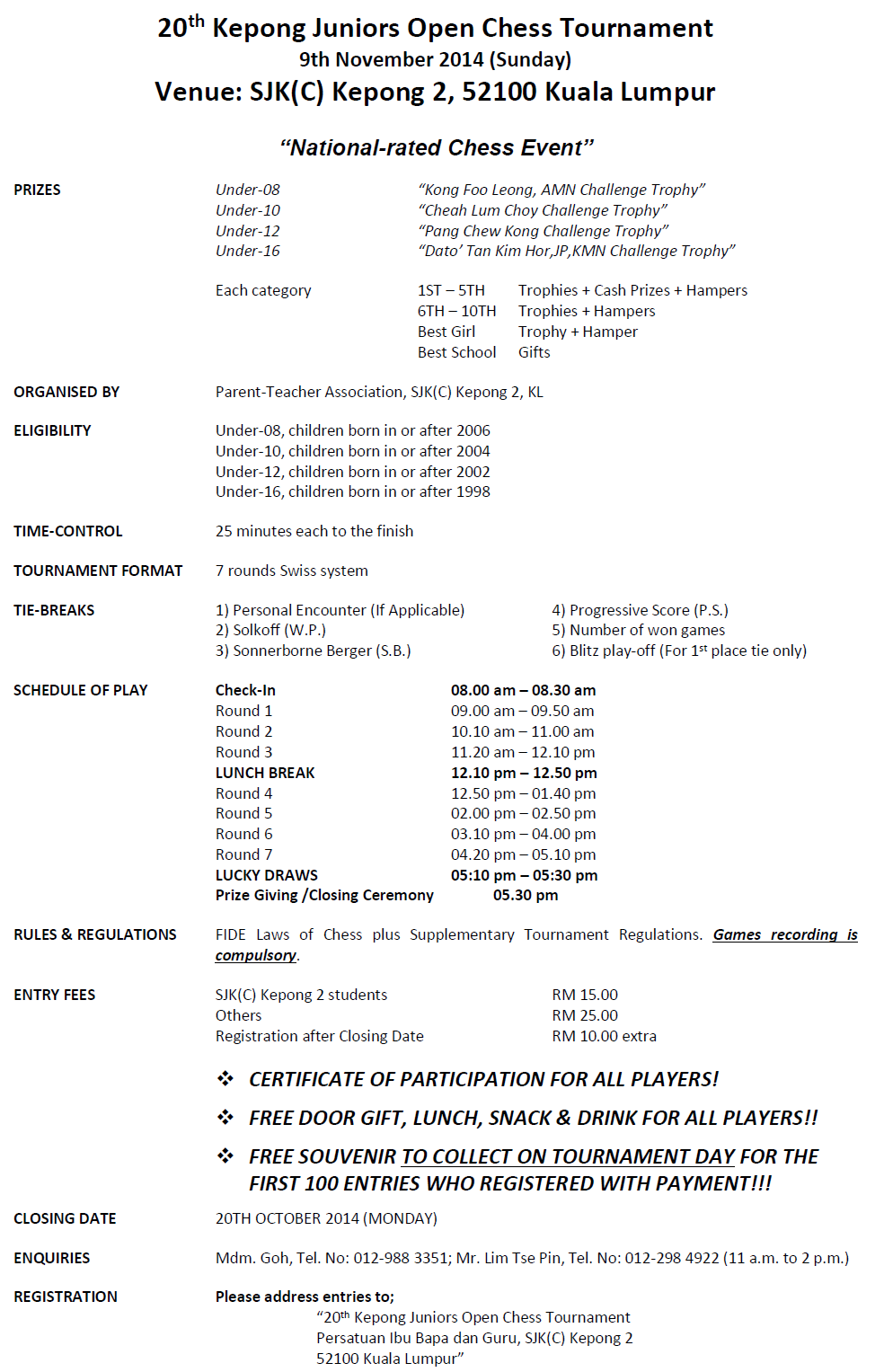 The Rules and Regulations: 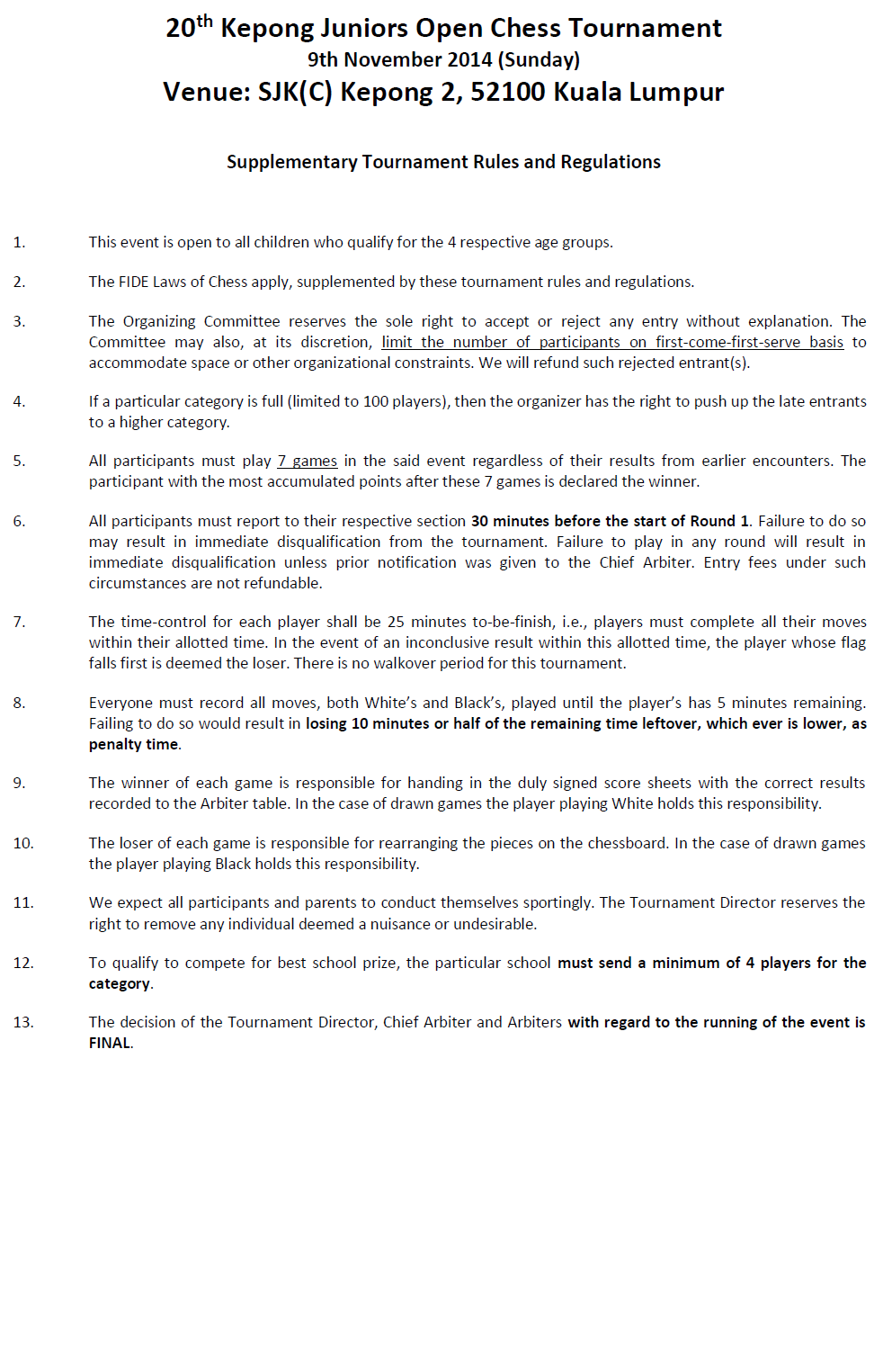 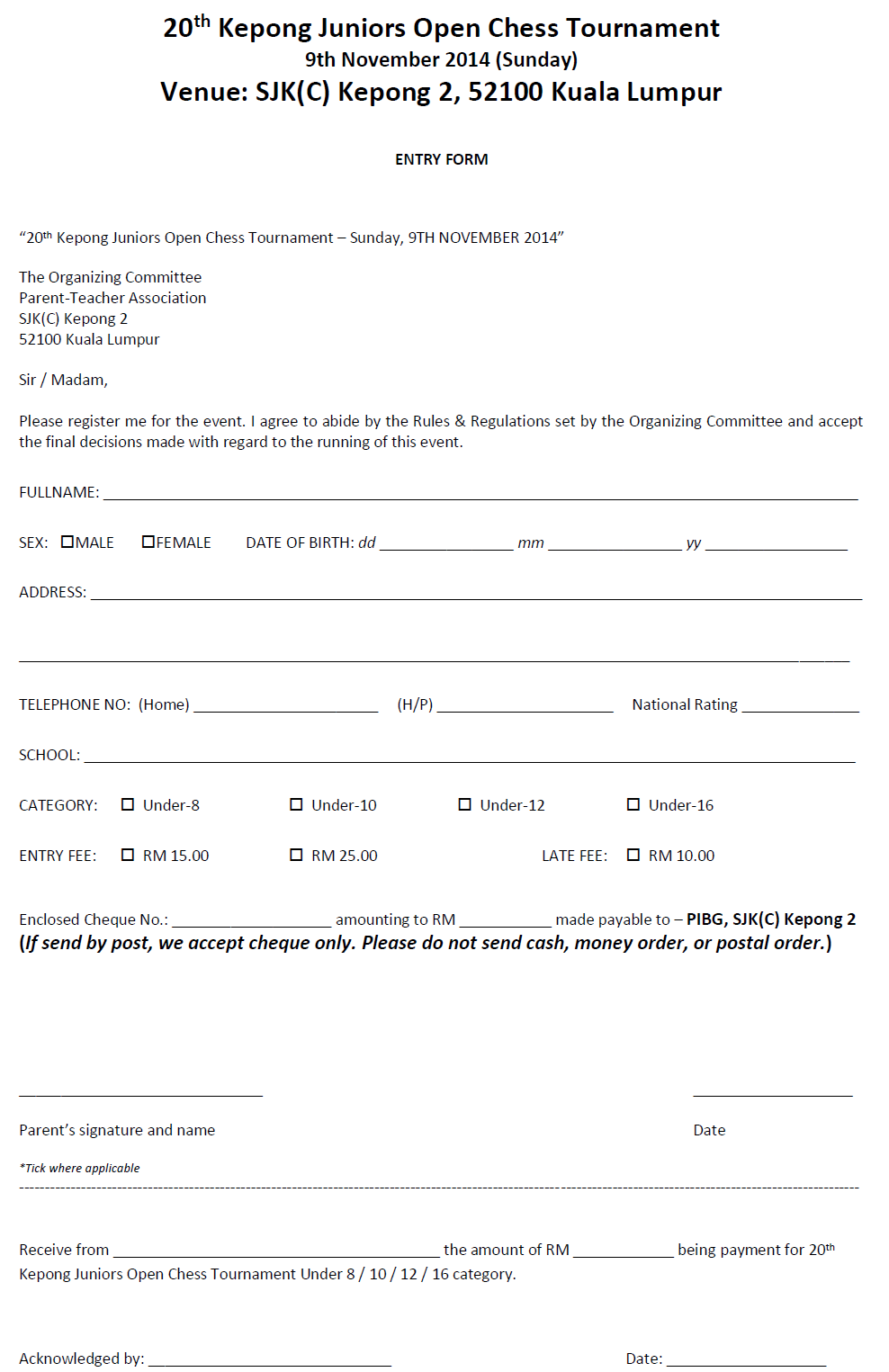 This 1-day national-rated event was divided into 5 categories with a combined of 254 players taking part. In line with the latest trend, the Under-10 category had attracted the largest crowd with 112 players, followed by the U-12 category with 54 players despite only a handful 12 y.o. took part due to UPSR preparation. While, the Under-7 category had a significant increased from 28 players last year to 41 players this year. As for the U-14 and U-16, these categories had 49 players in total.
This is the third national-rated event in Malaysia to be implementing with the Revised Laws of Chess. Among the changes from 1st July 2014 is a player shall lose the game in the 1st occurrence of an Illegal move.

This event was concluded ahead of schedule at 5.30pm. The fight for the Championship in this event was so intense until none of the pre-tournament top seed had emerged as Champion.

In the U7 category, Yap was the overwhelming favourite, however, he was stopped by Wong in whom he defeated during NAG 2014. This lost had cost him the Championship when Wong continues to pick up the remaining 2 points to score a perfect 6!
In U10 category, anyone who dropped more than 1 point will be out of top 10 bracket theoretically and a perfect 6 was needed to win this Championship. The 1st casualty among the tournament favourites was top seed Mohd Shahir who lost to 34th ranked Olivier in Round 2 followed by 4th ranked Chew lost to 21st ranked Muhd Al-Waqeef in Round 3. With the lost of a point by 2 pre-tournament favourites, the other favourites Ivan and Shreesh had a perfect 5 before playing the final round were in driver seat to claim the Championship. 6th ranked Looi also with perfect 5 was pitted against Ivan, and Shreesh played Muhd Luqman who is trailing half point behind. On paper, Ivan and Shreesh who are 110 points stronger (at very least) in playing strength than their respective opponent should at least get a draw if not a win BUT alas both the players lost and the crown went to Looi.
In U12, Jagathees hopes on the title was shattered when he lost to Dinessh in Round 4. While, Muhd Luqman Championship quest was lost too when he lost to Chan in Round 5. Both Dinessh and Chan played each other in the final round to decide the Championship. However, the game had ended in a draw. The former who had a superior 2nd tie-break was declared as the Champion. For the record, Dinessh was among the 'late entries for U10' who didn't get a place in U10. Who say a U10 player cannot win a prize in U12. In fact, he won the event!
In U14, Emir and Nithyalaksmi were the only players with perfect 4 after 4 rounds of play. In Round 5, the latter won the game and the Championship was more or less decided when she was pitted against 5th ranked Kabir who lost to Emir in Round 4. True enough, she had scored a perfect 6!
In U16, top seed Subramanian had failed to do a double for his family when he can only drew with Cheah in the last round. Earlier, he had suffered an unexpected lost to 11 y.o. Muhd Faqih in Round 3. While, Cheah had his Championship quest ended prematurely with a first round lost to Ng Jun Khai. While, Yee title hopes ended after a draw in Round 2 and a lost to Subramanian in Round 4. Muhd Faqih celebration on winning the Championship had to be put on hold when he lost to Cheah in Round 5 after scoring a perfect 4 including a win against Shivendran in Round 4. Nevertheless, he drew his last round against Yee and was crowned as Champion based on his superior 2nd tie-break over Subramian, Shivendran and Cheah. Now, we have a 11 y.o Boy winning U-16 Championship.
Who say a small boy (in age) can't defeat the bigger boys.
A tip for parents "Age is insignificant in Chess, it is the knowledge in Chess that matter most!!!"

You can obtain the complete results from the following links.

On behalf of the Organiser, The Summit USJ, I would like to take this opportunity to say a big thank you to all parents / teachers / coaches who had registered children for this event. This event has growth in strength since it first stated in 2012 with 166 children, then last year we had 211 children and this year we had accepted 254 children.

Due to space limitation, the event has to be capped at around 250 pax. The Organiser is unable to free-up more space to allow more participants - All in all there are 40 other players whom entries can't be accepted due to space limitation. Will plan for a bigger space in 2015 edition.

All players in the list (below) must arrive at the tournament venue BEFORE 10.30AM. The shopping mall is open to public at 10AM Sharp. For those who wants to arrive early, you may use the Car Park entrance at the Basement to get into the Shopping Mall.

There is no confirmation of registration needed as all players who had made payment shall be paired for Rd 1. A briefing on Revised Laws of Chess shall take place from 10.30AM before the start of Round 1 at 10.50AM.

The list of players who have made payment are listed below:-