This event specially caters for Juniors will be held on 8th July 2012 @ ATCC, Wilayah Complex, KL. A prize fund of RM 1,500 to be won by 30 juniors. Click here for a copy of the event in pdf format. 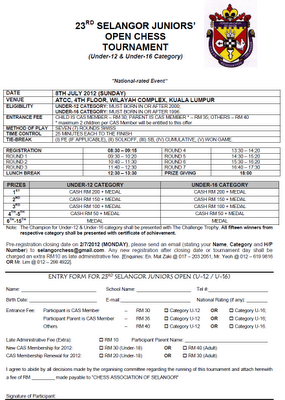 This event specially caters for Juniors will be held on 1st July 2012 @ ATCC, Wilayah Complex, KL. A prize fund of RM 1,500 to be won by 30 juniors. Click here for a copy of the event in pdf format. 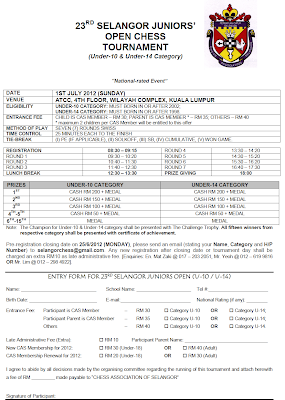 With reference to our article dated 4th May 2012, CAS will re-instate the Juniors event into our Calendar for the benefits of juniors aroung Klang Valley.

There will be 15 prizes to be won by players in EACH CATEGORY. The Champion in each Category will receives RM 200, a medal and certificate of achievement.

More details will be released over the next few days. Stay tuned...... 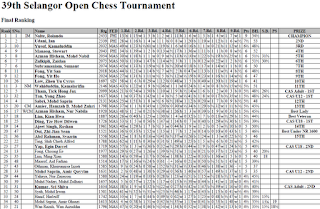 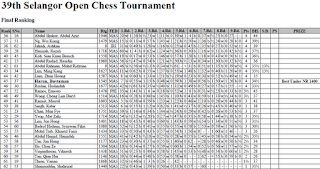 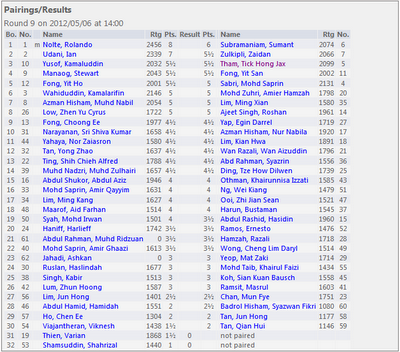 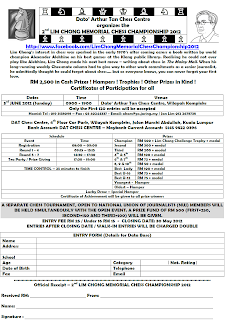 IM Rolando Nolte continues with his domination by chalking up 7 wins in-a-row to widen the lead to 1 point over countrymen Ian Udani whom he defeated in Round 4. In this Round, he is playing another countrymen Steward Manaog who is trailing 1.5 points away from the leader.

On  Table 2, Jax Tham taking White is pitted against Ian Udani. The former has a slow start but consolidated his campaign in this event to joint 3rd placing after 7 rounds of competition.

On Table 3, Sumant has bounced back with two successive wins yesterday and is pitted against 28th edition Selangor Open Champion Mohd Saprin. The latter had defeated Sean Ooi in Round 7. 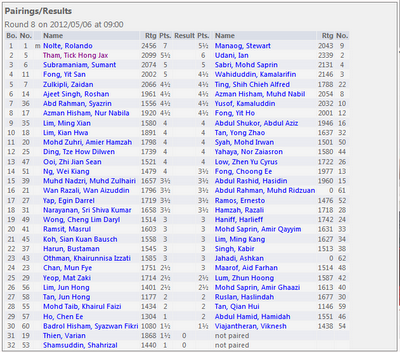 IM Rolando Nolte continues his half-point advantage over his nearest rival, Zaidan Zulkipli. Both players set-up a mouth watering top of the table clash. In Round 5, Zaidan overcame Kamaluddin from an exchange down position to win the game.

On Table 2, Ian Udani is pitted against surprise giant killer, Sean Ooi, who has continued to upset the form book for 4 straight games in-a-row. His victim in Rd 4 is SEA Games player Sumant Subramaniam. 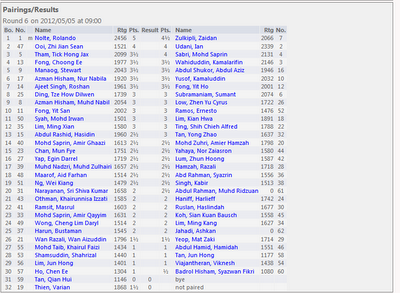 IM Rolando Nolte  is the sole leader after 4 rounds of competiton. In Round 3, he disposed off Ian Udani, seeded 2nd, who is also his closest rival in elo rating.

Nine other players on 3 points. They are Ian, Saprin, Sumant, Fong's brothers, veterans Kian Hwa and Jax, youngsters Dilwen Ding and Sean Ooi. The star of the day in this group is Sean, seeded 47th, has surprised many others by defeating CM Amier Hamzah in Round 4. In earlier rounds, he too has defeated 2 higher rank players including a chess coach from Perak.

Next, another 11 players on 2.5 points. Among them are NJM Muhd Nabil, NWM Nur Nabila, Steward Manoag of Phillipines, Eddy Fong, Roshan and Tan Yong Zhao.

Below is the cross-table for the top 30 standings after 4 rounds of competition:- 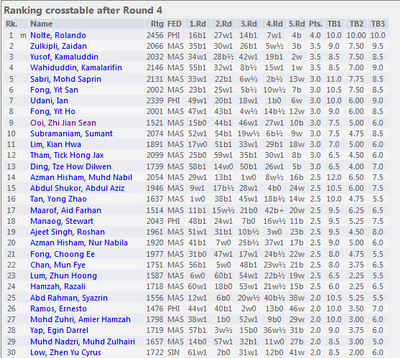 The Selangor Juniors Open for "Under-10, Under-14" and "Under-12, Under-16" have been rescheduled to 1st July and 8th July respectively. The venue for the event remains unchanged.

The original date for the "Under-10, Under-14" on 27th May is the first day of National Closed and the event is expected to be held in KL. There isn't any suitable date for the whole month of June. So, we have decided to reschedule the CAS Third Quarter Allegro from 1st July to 9th September (subject to the availability of ATCC) to make-way for 23rd Selangor Juniors Open.


The updated CAS Calendar as listed below:- 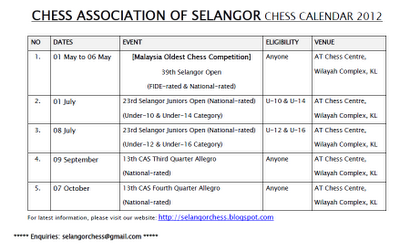