CAS will be organising her next 1-day event on 28th October 2012 @ Arthur Tan Chess Centre, 4th Floor, Wilayah Complex, KL. This event is supposed to be organised on 7th October but we had decided to shift the date towards end of the month due to school examination.

CAS has decided to improve on the value of main prizes to attract more chess players to join the Category 1. Click here to download the event inforsheet. If you are interested to participate, please pre-register yourself for the event by sending an email to selangorchess@gmail.com by 21st October 2012. Your support towards CAS-organised chess activities are very much appreciated. 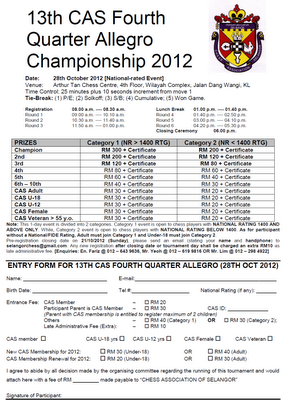 This event is held @ Arthur Tan Chess Centre, a regular home for CAS events. Usually, I can arrive at 8am since registration begins from 8.30am and Round 1 will be played an hour later for 7 rounds with Prize Giving Ceremony at 6pm. A very predictable routine indeed. However, it may not be the case this time. The registration time begins from 8am to 8.30am to make way for Round 1 to start at 9am. As usual, players begin to walk-in around 8.30am and registration closed at 9am. I had to blitz through the removal of names, Round 1 starts at 9.15am.

CAS has re-introduced the incremental time into the 1-day rapid event where 10 seconds increment shall be added to each move made by the player during the game. The main advantage for the Player is that he never run out of time anymore as long as a move is made before the time reach 0. While, the main advantage for the Arbiter is that he no longer need to make any decision on players who claim a draw under 2 minutes rule. As for the Organiser, no shortage of manpower as the need to have more arbiters servicing at the end of each round due to players "2 minutes rule" claim will never arise anymore. As for the Spectator, the atmosphere in the tournament hall while watching the remaining games at the end of each round is less tense. Well, it looks great for all parties.

Now, comes the main disadvantage for the Spectator is it kill off the excitement to watch both players blundered in the game especially when the timing reach critical level say less than half minute. As for the Organiser, each round have to start late if experienced players go into Bishop opposite colour endgame where the game may exceed 120 or even 150 moves with no end in sight and refuse to draw. For your information, a typical chess schedule with increment time is built based on 60 moves per game. In this case, 70 minutes per round. A 120-move game in every round will set back the schedule by 20 minutes for every round. This will add another 2 hours to the schedule for a 6-round competition. As for Arbiter, he shouldered a huge responsibility to make sure the event is able to finish as per schedule, else the Organiser reputation is at stake. Do you still remember one event that was played from 9am until midnight several years ago? While, the Player may find the increment time is a nuisance because he never need to use it anyway and some too find it so fascinating to end the game with a huge plus time to their clock. One instance that happened in this event, a player had 40 minutes in his time (plus 15 minutes from starting time) when his game ended after 30 minutes of play into the round. So, he needs to play at least 90 moves to get a 15 minutes extra in his clock assuming he took 0 second to play each of the 90 moves. Can you imagine how many moves did he played in the game? Luckily, this only happens to player who is trigger happy with the chess clock button, rather than playing the game itself.

CAS is the first organiser in Malaysia to introduce Rating category tournaments. I still remember the days when I proposed this 'out of the world in Malaysia context' idea to my Exco during one of those regular meetings. I was shot left, right and centre by my very own Exco for many reasons ranging from the added costing to strong and firm believers in Age-Group tournaments or just Single Open Category tournament format to the readiness of players. I was very fortunate to be given the greenlight to implement the idea by the very same Exco at the end of a furious brainstorming session. The motto by the President is 'Always allow the person who does the work to implement his idea and more importantly Exco must give full support to the implementer'. No sabotage among Exco members, once a decision is finalised. This is the culture within CAS.

In Category 1,  Dr. Ronnie Lim as top seed, Kamaluddin (2nd seed), Muhd Syazwan (3rd seed), followed by two Exco namely Jax Tham and Fariz to round up the top five seed. Actually, Ian Udani  supposed to be the top seed but he pulled out on eleventh hour. His place was taken over by fellow filipino Villanueva, Nelson who was not seeded, unintentionally, because he did not declare his elo rating to the Organiser. He started his campaign by defeating Emir, the one of the two U12 players, that qualified into Cat 1. Next, he drew with Faizal Roslan before defeating Fariz. After lunch, he scalped Jax and Ronnie before settling for a draw against Nor Ilhamuddin for a simple 4 wins and 2 draws to claim the 1st prize.  Actually, Nelson has a rating of elo 2278 (I found out after 3 rounds of play). The complete crosstable result for Cat 1, click here.

Where as, Category 2 is expected to be contested keenly as the top five players are separated by a mere 14 rating points. Fahim Saleh as top seed with NR1398, Christine Lee (2nd seed), Meor Airil (3rd seed) and Muhd Haziq (4th seed) from Pahang, and Chew Zhi Xuan (5th seed) with NR 1384. Fahim campaign suffered a huge blow when he lost unexpected to Jayakumar (18th seed) in Round 2. In the following round, the remaining 3 highest seed were upset by players seeded in mid-teens. This gave 5th seed, Zhi Xuan, who defeated giant-killer Jayakumar who is more than 4 times his age in Round 3 to become the new favourite into Round 4. He will be challenged by Viknesh (7th seed) and Eu Sheng (10th seed). Zhi Xuan continues his fine form to beat a more experience Zu Hao to set up a Championship match against Eu Sheng. He got 5 wins in a row and just need a draw against the remaining challenger, 14 y.o. Viknesh who is trailing him by half point. The boys fight it all out for their first ever CAS Championship in their chess playing years. Viknesh was winning at one stage before 10 y.o. Zhi Xuan unleashed a tricky tactical combination to recover back the lost piece to force a draw. The complete crosstable result for Cat 2, click here.

All players who have pre-registered (names listed below) must arrive at the tournament venue, Arthur Tan Chess Centre, by 8.30AM on this Sunday, 9th Sept. Round 1 will start at 9am. The time control is 25 minutes plus 10 seconds increment from move 1. This time control literally translate to 35 minutes per player (based on 60 moves per game) or 70 minutes per round. So, it is very important for the event to kick start @ 9am for Rd 1 to will ensure the 6-rounds event will finish before 6pm.

The namelist for Category 1 as follows:


The namelist for Category 2 as follows:

CAS has received a good response for the upcoming event on 9th Sept. There are few more hours left before the pre-registration deadline expires at 11.59pm, 6th Sept. If you have not register yourself but you still want to join the event without an extra RM10 penalty imposed on you, please send your name to selangorchess@gmail.com.

The list of people that have registered themselves for Category 1 on 9 Sept 2012:-


The list of people that have registered themselves for Category 2 on 9 Sept 2012:-


CAS really appreciate players who have performed pre-registration by 1st Sept 2012. For those who still want to to take part in this event but yet to perform pre-registration via email, please do so by sending an email with your name to selangorchess@gmail.com by 6th Sept (Thursday). Thank you.