Courtesy from MSSMKL website, the full result of zone qualifiers as below: 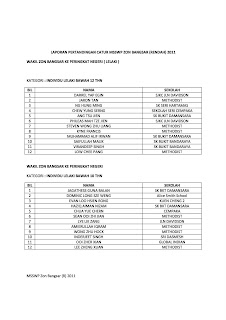 You can click on the image to get a better and bigger view.

Courtesy from MSSMKL website, the full result of zone qualifiers as below: 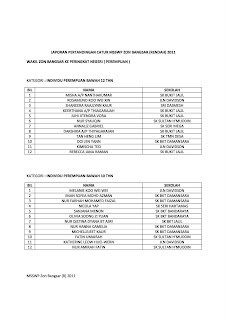 You can click on the image to get a better and bigger view.

Courtesy from MSSMKL website, the full result as below: 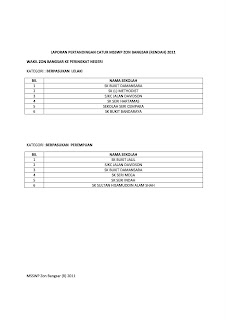 Last night during my weekly session with one of the 5-pointer player in this zone. A question was asked? What do I think on the outcome from the top of the table clash today? My answer is simple - It will be a draw since Wei Hao is expected to take Black.

With my predicted outcome, the Champion for the group will be anyone guessing but I think Wei Hao has a slight advantage, why? Wei Hao played 3 title contenders while Albert played 2 title contenders.

Both frontrunners have 5.5 points followed by 5 to 7 players with 5 points. True enough the frontrunners drew their game and 3 other 5-pointer won their respective encounter including the guy who asked me. All of them have 6 points from 7 games played.

After the tie-break calculation, Wei Hao is declared as Champion, followed by Albert on 2nd placing and Derek on 3rd placing. When comes to important tournament, a national-class player always produce the needed result.

Will update you guys when I have the complete result.

There will be a mouth watering top of the table clash in tomorrow final round where Albert is pitted against Wei Hao. Both players have 5 wins and a draw from 6 games played so far. In the 6th round, Albert drew with Derek, while Wei Hao defeated Jing Hong but drew Zhen Jing in earlier rounds.

The individual event is conducted over 3 days with 45 minutes allocated to each player. This is a better format to get a stronger crop of players to represent the Bangsar zone for the MSSMKL Final which is scheduled in April 2011.

The pre-tournament favourite for the U-12 Category is Darrel Yap from SJK(C) Davidson with a Nat. Rating 1417. As of press time, he already wins 5 games in a row. The Round 6 is on going. He is paired against Ang Tsu Jien of SK Bukit Damansara who got 4 wins and a draw. Will his experience prevails or his opponent 80 sessions stint rules?

In the Under-10 category, tournament pre-favourite is Jagathees Guna Balan who hails from Johor with Nat. Rating 1404. The whole family moved up to KL for the sake of developing his chess interest late last year. With the help of En. Suhairi, the boy is registered as SK Bukit Damansara student and get to enjoy the daily chess training facility provided by the school. As of press time, he already wins 4 games in a row. The Round 5 is on going. He is paired against Evan Loo of SJK(C) Kuen Cheng 2 who has 3 wins and a draw.

At top of the table clash, second highest rank Dominic Long of Alice Smith international Schhol with Nat. Rating 1373 has stopped Wong Zhu Hock of SK Methodist 4 consecutive games win. If Jagathees can get past Evan, then he will set-up the match of the day against Dominic Long in tomorrow final round.

Time flies so fast where the Inter-school competition has just kick-off with the Bangsar zone. Once again, KL beats Selangor to an early preparation for the team. Kudos to MSSMKL committee spearheaded by En. Suhairi.

This year the MSSMKL has reintroduced the Team event with 20 minutes time control per player. Also, there is a change in participation eligibility where only Malaysians can partake in this year competition. With this new ruling, Global Indians International School, the powerhouse for this zone has loses its shine before the event even started. Most of the last year prizewinners from this school are represented by non-Malaysians.

Without Global Indian International School in the team event, 11 schools competing in the team competition has the chance to be crowned as champion. In reality, 5 schools with regular coaching should easily finish in the top 5 of the standing.

Now who is the Champion? Why is this school so special? From reliable source, the school has engaged a permanent foreign coach (lets call him, Coach J) for the school to do DAILY chess training since November 2010. This literally translate to 80 coaching sessions or more between Nov 2010 and Feb 2011. The training paid off with the school securing 16 pts from 20 games played. The school is SK Bukit Damansara. Prior to this achievement, the school only has 1 MSSM player i.e. Natasha Kavina (under Coach L private guidance) who had graduated last year from the school. This school is able to engage foreign coach to be based in the school in order to conduct daily chess lesson due to their status as High Performance School accorded by the gov't. The gov't is allocating RM 1,000,000 each year to the school based on information published in the local newspaper.