The MSSM Chess Championship 2010 has concluded with Penang and Selangor have won the lion shares of 7 golds, 8 silvers and 3 bronzes from 12 categories. If you add up all the medals both states actually had won half the medals contested. Penang has won 1 more gold than Selangor, but the latter won 4 more silver than the former.

The medal tally is summarized below: 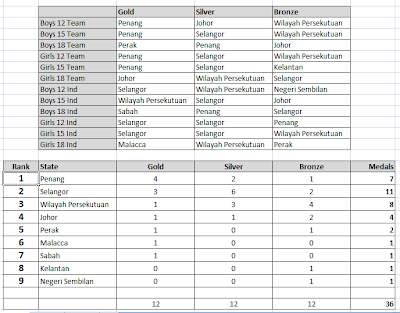 If the calculation is based purely on the medal tally listed above, just like the Olympic system, it is very clear that Penang is the Overall Champion. However, the actual results that are used to calculate the Overall Champion is not based solely on the Gold - Silver - Bronze medal standing only. Instead, it uses a system similar to MotoGP or Formula1 where a 10th placing or 16 placing will be awarded with points.

After factor in other results into the actual medal standing, Selangor may still end up pipping Penang to the Overall Championship title.

Will post the final result on the Overall Champion when I receive more updates from Perlis.